This episode of the “About To Review”/ “About To Interview” podcast features interviews I conducted while covering the 2019 Vancouver Short Film Festival (VSFF.com). There are talks with writers, directors, producers, actors and more! 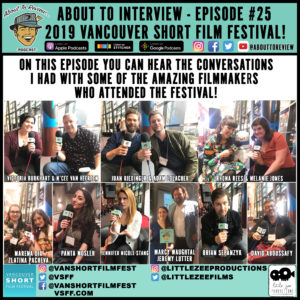 Thank you so much to this episode’s sponsor: Little Zee Productions!
Little Zee Productions is a Vancouver (BC) based production company specializing in short form digital content. They are film lovers that love making films and aim to tell stories that are authentic, funny, and honest.

Copyright © 2021 About to Review . All Rights Reserved. Theme by ILoveWP.com