This episode of the “About To Review”/ “About To Interview” podcast was recorded during the 2018 Seattle International Film Festival (SIFF) and features Oscar Winner Morgan Neville discussing his new film “Won’t You Be My Neighbor”. 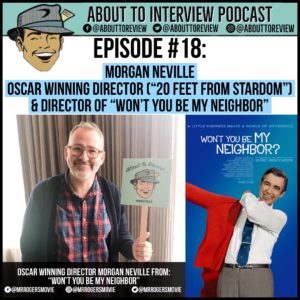 Make sure to watch the video version of these interviews on the About To Review YouTube channel!

“Won’t You By My Neighbor ” (IMDB.com/WYBMN) is an amazing documentary about the life and work of Fred Rogers. From his younger days of attending the Methodist seminary, onto becoming known worldwide for his show “Mister Rogers Neighborhood”, this documentary chronicles the man who was one of the purest, kindest, and gentlest people to have ever been in the public eye. For anyone who remembers watching his show as a child, you owe it to yourself to watch this film.

Thank you so much to Morgan Neville for making the time during his press tour to talk with me about his new film!

Guest info – Make sure to follow “Won’t You Be My Neighbor” on social media from the links below:

Copyright © 2021 About to Review . All Rights Reserved. Theme by ILoveWP.com