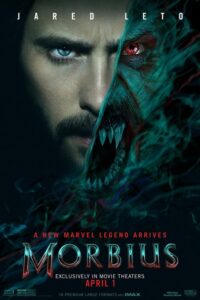 Well folks, this blog/ write-up is a historic occasion for two reasons:

Ok, moving on to the actual review. This movie is directed by Daniel Espinosa, whose previous well known work was 20017’s “Life”. This film stars Jared Leto, Matt Smith, Adria Arjona, and Jared Harris, along with side characters played by Tyrese and Al Madrigal.

The film is a (very) loose adaptation of the Morbius character from Spider-Man comics who made his debut in 1971. Why did it take so long for him to get his own movie? Simple; His character is not very compelling and making him more interesting is something the current comics still struggle with, but I digress. As we see in the film, Dr. Michael Morbius (Jared Leto) ws born with a crippling blood disorder that inspires him to become a world renowned hematologist that has created synthetic blood and has “saved the world” yet nobody seems to know or care who he is. His best friend Milo (Matt Smith) also has a rare condition and they grow up in an orphanage together and form an inseparable bond … all over the course of about 2 days. But just wait, that is just one of the many ridiculous plot-devices that happen in this movie.

We time-skip to the present where we see Morbius taking drastic steps to cure the conditions that he and Milo have which involve somehow splicing vampire bat and human DNA.

But really, none of that matters, because the “science” of it, even in a comic book based movie is dumb and makes no sense.

The editing in this move does not do it any favors as we have jump cuts, wipes, and splices that I can only imagine are supposed to distract you so much that you stop caring about what is happening in the scene because none of it makes any sense.

Throughout the film we see Morbius struggle with his condition, his mortality, his “love interest”, his experiments, and his eventual descent into madness.
But really, does any of that matter when literally no one in this entire movie has any chemistry? No.

Almost every line of dialogue seems forced to the point of absurdity. At one point Morbius says, when explaining his new powers “… echolocation, or ‘bat-radar’ for the uneducated”.

That is just one example of writing and editing choices that made me wonder: Who is this movie for? It is way too dark for the average Spider-Man/ Avengers age group, and yet it is not dark enough for the older audience, so it just sits in the limbo space of absurdity and irrelevance.

There are so many other things I could talk about which I will eventually do when I have time to record an episode about this but for now, damn, I leave this review with a bitter taste in my mouth from this idiotic film.

The three choices for grading films on this website are: Good | Bad | or Ugly

“Morbius” in theaters April 1st gets an “Ugly”.

Copyright © 2023 About to Review . All Rights Reserved. Theme by ILoveWP.com