Festival extravaganza! On this independant film filled episode, Dr. Andy returns to the studios after a brief hiatus and he and John talk about 3 different film festivals: “Translations”, “50 Hour Slam”, and “SIFF”, as well as a review for the documentary “Man Made”. 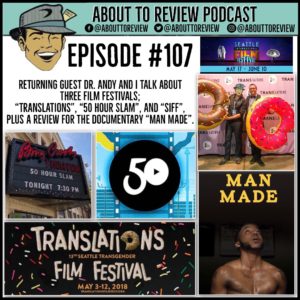 After the review for the new documentary “Man Made”, Dr. Andy and John go over the details of the 50 Hour Slam competition and festival and each give their top 3 picks of the festival, and I highly encourage people to check out all of the festival links below!

The three different film festivals talked about in this episode vary in location, size, and length, but are all fantastic in their own way.

Thank you so much to Dr. Andy for making his triumphant return to the show!

Copyright © 2022 About to Review . All Rights Reserved. Theme by ILoveWP.com